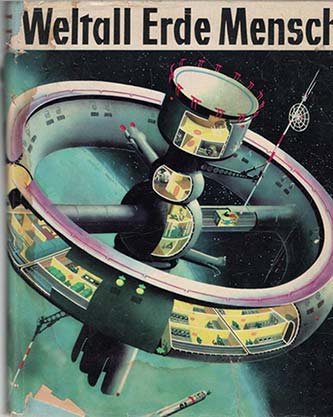 The current issue of Culture and Cosmos focuses on the interpenetration of literature, astronomy, and astrology. This is a topic that has been close to my heart for more than half my life, and it encompasses many of the questions that drove my PhD research at Berkeley. When the editors of Culture and Cosmos and I sent out the call for papers, we received a wide response, and this issue showcases the breadth and depth of the field.

One of my favorite parts about putting this issue together was choosing the cover image. Reinhard Mussik contributed an article analyzing one of my favorite books from the German Democratic Republic, Weltall Erde, Mensch. This textbook was the curriculum for the GDR’s secular confirmation ceremony, the Jugendweihe. East Germans were still getting confirmed in the Catholic church throughout the GDR years, but the Jugendweihe was a way for the State to encroach upon and control that religious practice. While I lived in Leipzig, Germany as an exchange student in 1998–99, my host family recounted their Jugenweihe experiences to me, and I ended up getting my own copy of Weltall, Erde, Mensch. While the text does not include any astrologers, per se, it is definitely a Marxist-Leninist cosmology wrapped onto the natural, social, and political histories of the world—definitely a fantasy narrative of extreme proportions. The cosmological perspective of the cover illustration orients the reader in the space they are about to enter in issue 17.1.

The editorial I wrote for the issue follows here:

More often than not, the researcher interested in astrology will be challenged in the academy with questions of veracity: Is astrology true? Do you believe in it?[1] Yet, researchers in literary studies are rarely asked whether or not their material is true, or whether they believe in it. Fiction provides a modicum of shelter from such enquiry. When astrology is examined along the lines of and alongside narrative, the question of truth can be sidestepped and a rich array of cultural knowledge can be explored. This issue of Culture and Cosmos presents a collection of articles that delve into the intersections between textuality and cultural astronomy and astrology. I have deliberately chosen not to organise the articles according to temporal logic in order to resist any teleological connotations a chronological ordering may imply.

The issue opens with a robust collection of verse concerning the discovery of new astronomical bodies at the turn of the nineteenth century. Clifford J. Cunningham and Günter Oestmann present many of these works in full while demonstrating how poetry was used as an ‘intellectual tool’ of science, not only to memorialise the new bodies being discovered, but also to negotiate naming rights, often along political and linguistic lines.

While these nineteenth-century writers openly touted their findings, the next article discusses a potential covert encoding of astronomical observation in poetic form. Dorian Knight looks to the structure of the Eddic myth Hávamál, to reveal a verse description of the lunar cycle. He shows how allegory encodes astronomical information, and in turn, how this astronomical knowledge aids in unraveling the mythological content of the narrative.

In the next article Karen Smyth discusses the role of technical astronomical and astrological expressions in medieval literature by authors such as Geoffrey Chaucer and Adelard of Bath, among others. She argues that these terms become a site both for the comprehension of the temporal cosmos and the exercise of poetic experiment and the demonstration of its mastery.

Then, Kirk Little performs a literary analysis of Washington Irving’s 1832 tale, The Legend of the Arabian Astrologer, a tale that is curiously void of technical astrological terminology. Little situates his reading in the context of early nineteenth–century astrology in England and America, and argues that we can read Irving’s short story about an Egyptian astrologer as a litmus test for the status of astrological knowledge at the time—a useful model for future research into other tales.

Moving from a fictional Egypt to a real one, Guiliano Masola and Nicola Reggiani examine a curious papyrus, dated to 194 CE, that offers insight into the role astrology may have played in everyday life in ancient Eygpt. They explore the implications of this letter between two friends, in which precise and advantageous astrological advice is dispensed concerning an economic transaction.

Finally, continuing with the theme of economics and cosmology, Reinhard Mussik presents a research note about a fascinating text from former East Germany in terms of the Marxist cosmology embedded in it.

Together these articles display the myriad angles from which one can approach the intersections of literary analysis and cultural astronomy and astrology.

Head over to the Culture and Cosmos website to get a copy of the issue!